Dig up the Power of Super Roots

In recent years, we’ve heard plenty of buzz surrounding both ginger and turmeric as ingredients and natural remedies for a variety of ailments. Many see these spices as ‘superfoods’ with abundant flavour potential that can be incorporated into cooking, baking and even beyond. Let’s dig up a greater understanding of these two fantastic super roots so we can harness the full potential of both ginger and turmeric!

The spicy ginger root is native to Southeast Asia and is part of the Zingiberaceae family, which also includes turmeric, cardamom and 1,300 other species of roots across Africa, Asia and the Americas. Ginger has a rich history that dates back an impressive 5,000 years! Ancient Chinese and Indian descendants used ginger mostly for medicinal uses, but as time passed, the root made its way into cooking. Currently, many countries around the world cultivate and use ginger, which can be grown year-round. Mature ginger rhizomes are nearly dry and fibrous. The young ones, on the other hand are juicy, have a mild taste and are fleshy. In North America, we normally come across the mature ginger rhizomes in supermarkets.

Perhaps the most well-known characteristics of ginger root are both its unique flavour profile and knobby appearance. The taste of ginger can be described as a spicy, zingy and earthy. Ginger brings the kick and taste to many meals and is commonly used as a flavouring agent – it can be a great substitute instead of adding excess salt or sugar. It is difficult to miss ginger in a meal as it has a taste that becomes predominant compared to other more subtle flavours.

You may have come across health food professionals, chefs and influencers identifying ginger as a superfood – but what makes it so super? Ginger contains significant amounts of various nutrients including vitamin C, vitamin B6, potassium, phosphorus, riboflavin and magnesium. Ginger is commonly known to aid with colds, sore throats and congestion due to its anti- 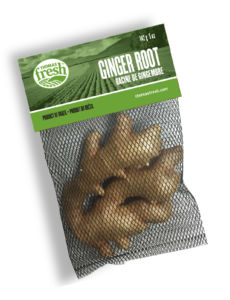 inflammatory properties which can help fight bacterial infections. This super root can also provide relief against a painful stomach due to it stimulating the production of bile in the body. If that isn’t impressive enough, ginger root can be used to aid with dizziness, motion sickness and vertigo. Some studies even link ginger to regulating blood sugar! The list goes on and on with ginger – the main take away here is that this root does a bounty of good within our bodies

Spice up your Life

Ginger is primarily used as a spice in the kitchen. In countries like India, it is used in almost everything on some menus! This root is easy to peel and dice up for recipes. It is also simple to shred and lasts a long time before decomposing – ginger root claims a shelf life of almost a month when refrigerated. An added bonus when using ginger is its fragrant aroma which will fill your kitchen with a cleansing smell! See ideas below on how to use ginger in recipes.

Find our Thomas Fresh ginger in 4 oz and 5.64 oz packages available in both conventional and organic options. Bulk ginger can also be found at your local grocery store.

Turmeric is a product of Curcuma Longa, a perennial plant that belongs to the ginger family – Zingiberaceae. This golden spice has been popular since ancient times, with a history dating as far as the 5th century AD in Indonesia. In these times, turmeric was used as a culinary spice and had religious significance. Nowadays this boldly orange root, is commonly used as both a dye and flavouring agent around the world. It is cultivated most in India (the country produces approx. 94% of the world’s supply). Other countries which grow turmeric include Fiji, China, Brazil and Peru. Distribution in India and South Asian countries still remains strong. However, popularity in North America has increased for this unique super root.

Turmeric packs a pungent, slightly sweet, earthy taste. It has a rich orange-yellow colour which is extremely potent and can immediately stain anything it comes into contact with. The look is similar to a ginger root as it has knobby, papery skin. It should be noted that orange or yellow turmeric is most commonly known in North America, however turmeric has another lesser known variety, white turmeric. White turmeric has light brown skin and white flesh, the taste is similar to that of ginger, but with a slightly more bitter flavour profile.

Turmeric is considered a superfood due to its long list of nutritional benefits – it contains more than 300 naturally occurring components! Some of the top contenders: vitamin C, calcium, fiber, iron, potassium and even zinc. This golden super root is known to be anti-inflammatory and anti-microbial. Turmeric can be used to heal wounds, combat abdominal discomfort and is rich in antioxidants. It can help increase appetite and aid in combatting memory loss. Some turmeric lovers increase their consumption during cold and flu season as it can help boost immunity.

Something to note – for your body to properly adsorb turmeric, always combine it with black pepper.

Turn up the Turmeric in your Kitchen

If you’re interested in experimenting with this golden-hued spice in your kitchen – we have some recommendations to get you inspired. Turmeric is a key ingredient in many Asian dishes, however there are many other areas of cooking and beyond where you can use this super-spice.

Find our Thomas Fresh Turmeric in a variety of options including Yellow Turmeric 8oz, White Turmeric, 8oz and Organic Yellow Turmeric , 3 oz. Comment below on how you use our Turmeric products! We would love to hear your feedback.